Captain Ed Robinson started his career with the City of White Plains Police Department on August 6, 1993. Upon completion of recruit officer training, he was assigned to the Patrol Division. 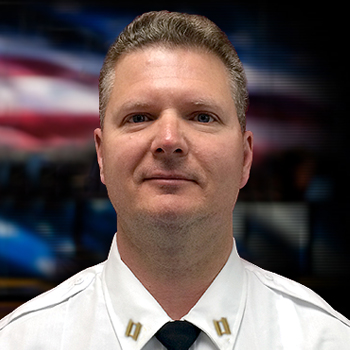 During his time in Patrol, he served as a Field Training Officer, was a Department Armorer and was a member of the Department’s Special Response Team.

In 2004, he became a member of the newly created Emergency Service Unit. He served in the unit until his promotion to Sergeant in 2006.

As a Sergeant, he returned to the Patrol Division supervising patrol squads and coordinating the recruit field training program.

In 2014, he was promoted to Lieutenant and served as a Department Tour Commander supervising patrol operations for his patrol squads.

In 2021 he was re-assigned to the Community Advocacy Strategic Initiative Division. During his time there, he served as the Executive Officer of the Division overseeing the Department’s Domestic Violence Unit, Mental Health Outreach Unit, Recruiting/Background Investigations Unit and School Resource Officers.

He was promoted to Captain in March of 2022.