Captain Anthony Drago is a 27 year veteran of the Police Department and is currently assigned as the Commanding Officer of the Administration & Training Division.

Captain Drago spent the first 10 years of his career as a member of the Patrol Division. During this time he was an active Field Training Officer of new recruits.

In 2004, he was selected to work on several technology projects for the Office of the Commissioner, which included the design and development of the Department’s Intranet. He was promoted to the rank of Detective during his time assigned there. 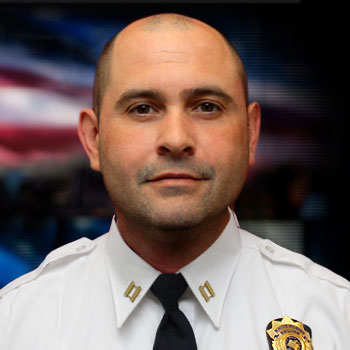 He was promoted to Sergeant in November of 2008 and was reassigned to the Patrol Division as a squad supervisor for 11 months before taking over duties of the Department’s Data Management Supervisor.

After his promotion to Lieutenant in August 2013, he successfully managed a capital project that implemented mobile field reporting for the police department, allowing the department to go “paperless” in January of 2014.

As Executive Officer of Administration, he was appointed by Mayor Tom Roach to lead a committee that made sweeping changes to taxi regulations for the City of White Plains. The major overhaul of the city ordinance was approved by the Common Council in April of 2016.

He later successfully managed a 1.5 million dollar capital project which involved the upgrade of the City’s Police/Fire Dispatch, Records Management and Mobile Systems over a thirteen month period between 2016 and 2017.

He was promoted to the rank of Captain in July of 2021 and took over command of the Administration and Training Division.