Police Chief Joseph Castelli is a 32 year veteran of the White Plains Police Department. As Chief he oversees the management of uniform services, all investigative units, personnel and information systems.

Chief Castelli served the first nine years of his career as a patrol officer, as well as a Field Training Officer and DARE officer. He was assigned to the Detective Division in 1999, promoted to Detective in 2000. 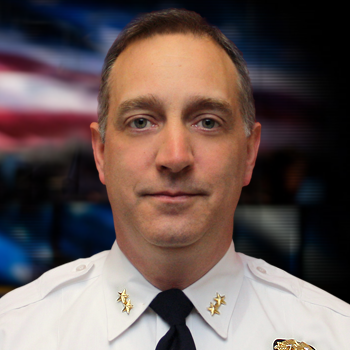 He was promoted to the rank of Sergeant in 2001. As a Sergeant, he was assigned to Patrol, as well as the Neighborhood Conditions Unit and Special Operations.

In 2005, he was promoted to Lieutenant, where he served as a Tour Commander, the Executive Officer of Patrol and then as Patrol Commander.

In 2012, he was promoted to the rank of Captain and served a year as the commanding Officer of the Patrol Division, and was then assigned as Commander of the Criminal Investigations Division. He was promoted to Assistant Chief in December of 2018 and Chief of Police in July of 2019.

Chief Castelli is a certified police instructor and holds a B. S. in Organizational Management from Manhattan College and an Assoc. in Criminal Justice from Westchester Community College.